Beware! PM2.5 in the ambient air is increasing-Prana Air investigates 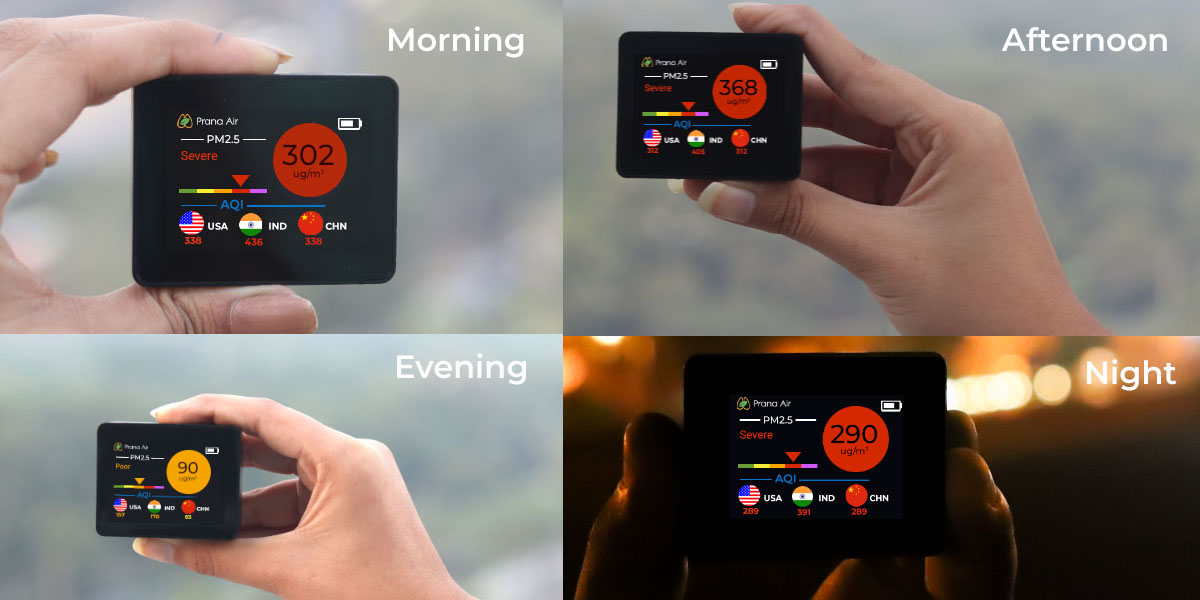 Have you observed any changes in the visibility outside lately? Do you feel irritation in your nose and throat whenever you go out? Are you cancelling your outings and preferring to stay indoors nowadays? If the answer to all these questions is yes, then you are falling prey to the winter pollution that is steadily spreading its roots since the beginning of this month. Its impact is not really unnoticeable. The concentration of PM2.5 in the ambient air is the main culprit, and Prana Air decided to investigate how and why!

Why are winters so uncomfortable in terms of Particulate Pollution?

The levels of air pollutants, like particulate matter, start to rise with the onset of winters. This happens because of the combination of two phenomena- Winter Inversion and Vertical Mixing.

Various sources release varied concentrations of air-contaminants that remain suspended into the ambient air. During summers, the air in the lower part of the atmosphere is light and warm. Due to this, it rises upwards with ease and carries these pollutants in the subsequent upper layers. The upper layers of the atmosphere contain relatively cleaner air, and thus, the pollutants move farther away from the ground. This is called vertical mixing.

Atmospheric inversion occurs in winters. The normal conditions reverse themselves, and air near the lower atmosphere is cooler and denser. The relatively warmer air of the upper layers, hence, acts as an atmospheric lid. This lid entraps the pollutants within the cold layer and evades their atmospheric dispersion. Therefore, the vertical mixing occurs in the lower layer itself.

At constant emission rates and concentration of pollutants, the lesser the temperature, the more is the pollution.

As a result of these events, the pollution levels are lesser in summers as compared to winters, provided the spatial and meteorological remain the same. You can observe a similar effect during winter
afternoons. The increase in heat levels down pollution slightly.

The early mornings and the nights are the worst. The impact of inversion is visibly evident, which is why the air quality plummets during these hours.

Does that mean blaming Dussehra for the rising pollution levels in Delhi is wrong?

No. Festival of Dussehra exacerbated the problem of air pollution in the state.

Air quality is an ambiguous attribute. Numerous spatial, temporal, atmospheric, anthropological, and meteorological factors contribute to the air quality of a particular area.

People burnt hundreds of effigies locally, to mark the festivities of the triumph of good over evil. However, it increased particulate emissions. People also lit firecrackers which contributed to the sudden spike in the levels of pollutants.

Many areas of Delhi-NCR witnessed a rise in the pollution levels even as wind speed- a crucial meteorological determinant- remained low.

Experts have predicted that the pollution levels will continue increasing as the days will progress. Thus, we decided to run an immediate follow-up on the information.

The following figure contains the data accessed from the official website of the Central Pollution Control Board (CPCB) on October 26, 2020. Rohini, Delhi was entered as the target location because this monitoring station was the nearest to our premise (2.2 km away).

We also observed the real-time concentrations of PM2.5 with the help of our Pocket Monitor over a period of 12 hrs throughout the day. We photographed the readings at different temporal intervals, viz. morning, afternoon, evening and night.

The visibility from the terrace of our building was very low. The concentration of PM2.5 in the ambient air stood at 302 micrograms per cubic metre. Air was not breathable, and we felt thankful towards the masks we wore.

The visibility had worsened. The concentration of PM2.5 in the ambient air stood at 368 micrograms per cubic metre. We started missing indoors as soon as we stepped out. As soon as we were done, we rushed back inside. 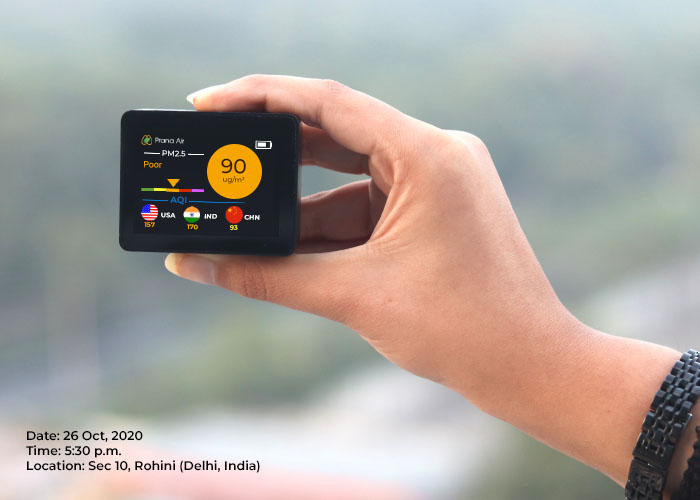 We took the reading at 5:30 p.m. Air was better than what we were breathing since the morning. The view was moderately visible. The concentration of PM2.5 in the ambient air stood at 90 micrograms per cubic metre.

The concentration of PM2.5 in the ambient air stood at 290 micrograms per cubic metre.

All of the readings were in more or less sync with the data from the CPCB website.

The situation is worrisome. We cannot control the phenomenon of winter inversion. However, we need to take immediate action to limit the factors that we can- the emissions.

We need to monitor and control the rate of our emissions which may increase the pollutant concentrations in the atmosphere.

The festive season is around the corner. We need to ensure that we celebrate in a manner that does not exacerbate the pollution-situation.

Case Study: How Prana Air aided Ola and Microsoft in their study to monitor street-level pollution through custom-made PM2.5 monitors in a record-breaking time!
11/11/2020

Case Study: How Prana Air helped CII in their efforts to monitor air pollution due to stubble burning in Punjab and Haryana
03/11/2020