Air pollution and the brain’s degeneration with age found linked! Is your child safe?

You are here:
Air PollutionArticleNews 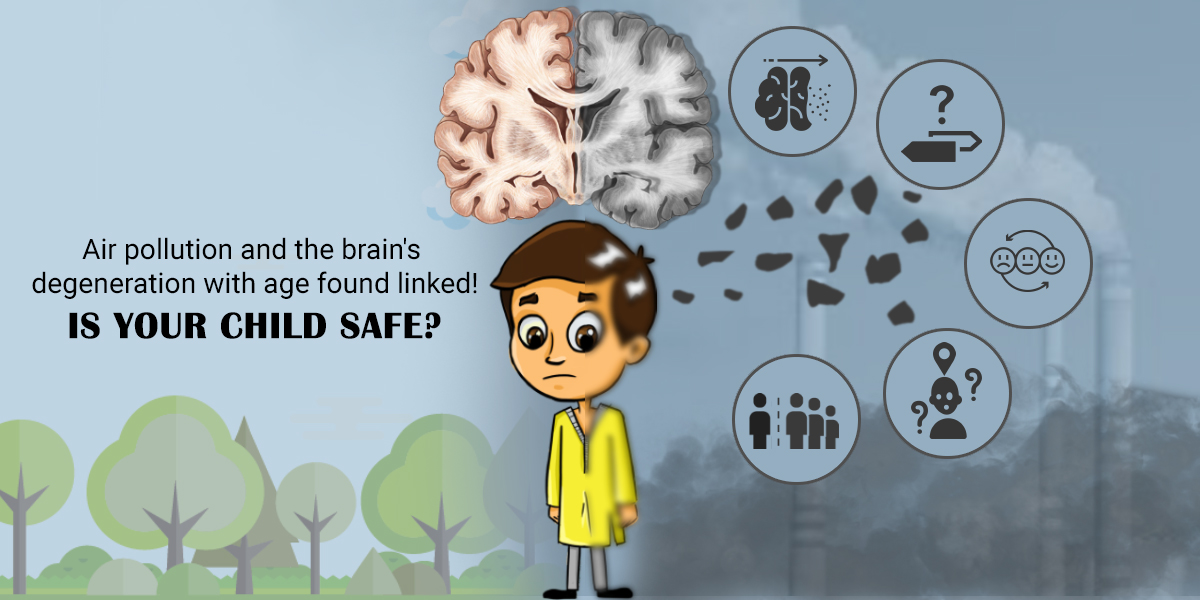 Have you ever thought whether or not there is an association between air pollution and the brain’s degeneration? Air pollution is one of the top 5 causes of death globally.  It causes a conspicuous impact on the respiratory tract as well as our hearts. But a new study claims that it is notably altering our brains too!

Mexico City- an urban capital of Mexico undergoing air pollution crisis- was the center of this research that targeted the brains of children and young adults. The test population showed plaques, tangles, and growths linked with degenerative disorders such as Parkinson’s, Alzheimer’s, and Motor Neurone Disease (MND).

However, it is still not confirmed whether or not the presence of these markers permutes into neurological diseases later in life. Plaques and tangles can accumulate in the brains of patients diagnosed with Alzheimer’s and other neurological conditions. This breakthrough finding has inspired scientists worldwide to figure out the role of these biomarkers and their mechanism in the progression of diseases.

Almost 9 out of 10 world’s children live in places threatened by air pollution. There is a perpetual risk of inhaling particulate matter like PM2.5 and PM1, which can cause irreversible damage. The intensity of damage can only amplify with age due to the accumulation of these particles over time.

Previous studies have indicated that the nanoparticles such as PM2.5 and PM1 from the air may reach the brain. But can accumulation of minute airborne particles also trigger neurological degeneration? Is there any relation between air pollution and the brain’s degeneration with age?  If yes, then this might be a preliminary indication of the correlation between air pollution and diseases like Alzheimer’s and Parkinson’s. It will also shed some light on the physiology of the association. It has thus raised the eyebrows of scientists all across the globe. And if there indeed is a possibility, we need to know before it is too late.

The study published in the journal Environmental Research focused on examining the brainstem of a recently deceased population with age ranging from 11 months to 27 years. The researchers dissected the brains of 186 subjects who died suddenly.

Children do not show symptoms of Alzheimer’s and Parkinson’s diseases, but they were crucial for this study. It is because their brains are not affected by other age-related contributing factors such as alcohol or other chemical intoxicants.

Therefore, it can provide better evidence to confirm whether there is a link between air pollution and the brain’s degeneration.

Quite shockingly, even the youngest brain stem of a mere 11-month-old baby showed brain abnormalities in the form of plaques and tangles. The rest of the subjects also showed similar growths.

Apart from biological markers, the examiners also witnessed the presence of metal-rich nanoparticles in substantia nigra – the area of the brain stem linked with the progression of Parkinson’s disease.

Some nanoparticles extracted from the subjects were rich in iron and aluminium. These resembled the combustion- and friction-derived nanoparticles found in combustion engines.

Another observation included needle-like titanium-rich particles in the nerve cells of the gut wall.

However, the similarly-aged subjects from the less-polluted areas of the city did not show any of these observations.

Does that mean air pollution and the brain’s degeneration are correlated?

Unfortunately, yes! The siren of danger is ringing!

The presence of nerve cell growths, plaques, and tangles in the grey matter is a common feature of some variations of MND and Parkinson’s disease. Latter being the fastest-growing neurological condition in the world is associated with progressive neural damage.

The potentially-degenerative nanoparticles pave their way to the brain either via nasal passage or digestive tract after being swallowed. This finding presents air pollution as a plausible catalyst in the cognitive decay of those living in vulnerable areas.

Albeit there is no proven-casualty because of these nanoparticles, researchers are sure that their presence inside critical areas of the brain cannot be meaningless. If an 11-month-old child is displaying the markers, then the long-term impact can be catastrophic.

This research establishes a petrifying linkage between air pollution and the brain’s degeneration. The situation is alarming as scientists termed air pollution the Silent Pandemic earlier this year.

Therefore, the need to control air pollution has taken center stage. We need effective measures to counter this problem now more than ever. Otherwise, we might witness something more devastating than what novel coronavirus is causing.

To know about air quality of your location and determine whether your child is at risk, click here.