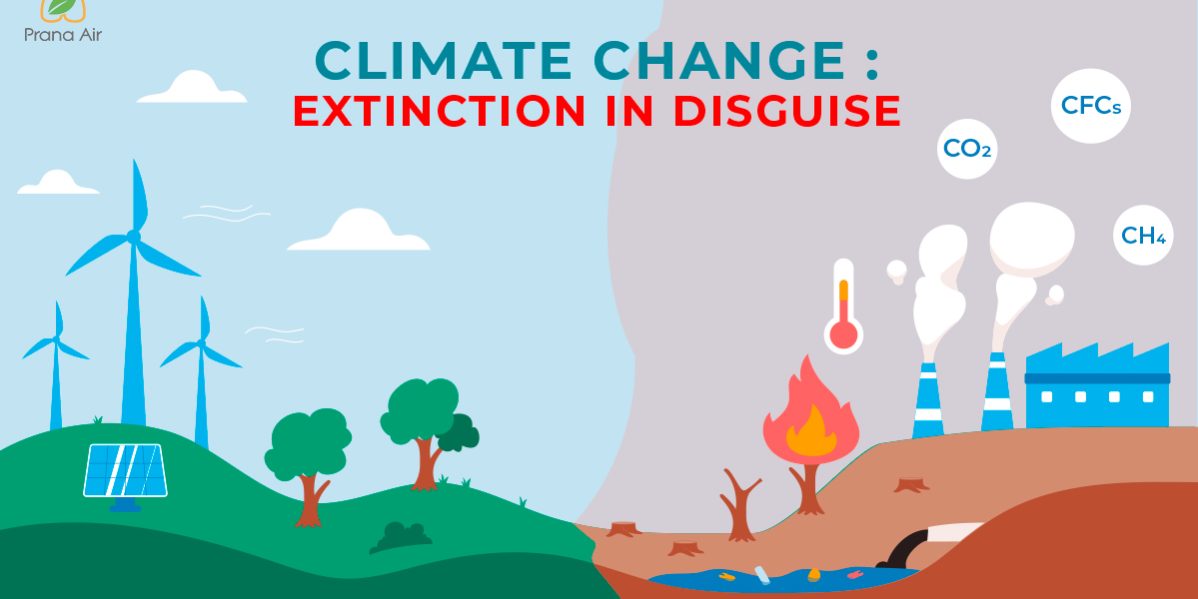 Climate Change refers to a location’s overall weather conditions over a long period of time. Maine, for example, has a chilly and snowy winter climate, but South Florida has a balmy environment all year.

Many individuals believe that climate change primarily entails higher temperatures. However, the rise in temperature is merely the beginning of the narrative. Changes in one place can impact changes in all others since the Earth is a system in which everything is interrelated.

Emissions are continuing to climb. As a result, the Earth has warmed by around 1.1°C since the late 1800s. The previous ten years (2011-2020) were the hottest in recorded history.

What is Climate Change?

Why is Climate Change taking place?

Climate change has occurred in the past, but the current changes are faster than any known occurrence in Earth’s history. Carbon dioxide (CO2) and methane, are the primary reason. Additional sources include agriculture, steel manufacturing, cement production, and forest loss. These factors, taken together, accelerate global warming.

Long before humans were on the scene, the world experienced periods of warming and cooling. This occurred due to:

Greenhouse gas emissions produced by human activities are the primary cause of today’s rapidly changing climate. Since olden times, carbon dioxide in the atmosphere has increased by 46 percent. This makes it the planet’s primary contributor to climate change.

Our planet’s woods and seas absorb greenhouse gases from the atmosphere via photosynthesis and other processes. Then also, they are unable to keep up with our increasing emissions. As a result of the accumulation of greenhouse gases, the earth is warming at an alarmingly rapid rate. During the twentieth century, the earth’s average temperature climbed by around 1 degree Fahrenheit. If you don’t think that’s a lot, consider this: when the last ice age ended, average temperatures were just 5 to 9 degrees lower than they are now.

How is it affecting the environment?

Climate change is projected to lead to the extinction of a large number of species. Many terrestrial and freshwater species have migrated poleward and to higher altitudes as a result of recent warming. Heatwaves and drought have lowered and bleached coral reefs. Ocean acidification makes it difficult for species like mussels, barnacles, and corals to form shells and skeletons. Harmful algal blooms reduce oxygen levels, disrupt food webs, and result in a significant loss of marine life.

Since the late 1800s, the planet’s average surface temperature has climbed by around 1.18 degrees Celsius. This is mostly because of rising carbon dioxide emissions into the atmosphere and other human activities. The last 40 years have seen the most warming, with the last seven years being the hottest. 2016 and 2020 are tied for the hottest year ever recorded.

Although the waters have warmed more slowly than land, plants and animals in the ocean have moved to the frigid poles at a quicker rate than land-based species. The water has absorbed much of the extra heat, with the warming of more than 0.33 degrees Celsius in the top 100 meters since 1969. 90% of the surplus energy on Earth is stored in the ocean.

The bulk of the Greenland and Antarctic ice sheets has shrunk. Greenland lost an average of 279 billion tons of ice every year between 1993 and 2019. Antarctica lost roughly 148 billion tons per year.

In the Alps, the Himalayas, Andes, Rockies, Alaska, and Africa, glaciers are disappearing practically everywhere.

The quantity of spring snow cover in the Northern Hemisphere has reduced during the last five decades and the snow is melting sooner.

Over the last several decades, both the area and thickness of Arctic sea ice have significantly decreased.

The acidity of surface ocean waters has grown by around 30% since the beginning of the Industrial Revolution. This rise is due to people putting more carbon dioxide into the atmosphere. It is then absorbed by the ocean in greater amounts. In recent decades, the ocean has absorbed between 20% and 30% of total human carbon dioxide emissions.

Climate change’s human consequences are considered by the WHO to be the biggest danger to world health in the twenty-first century.

Why is climate change the biggest threat?

According to research, present warming is 10 times higher than the average pace of ice-age recovery warming. After the last Ice Age, carbon dioxide from human activities increased more than 250 times faster than it did from natural sources.

Temperatures on land have risen twice as quickly as the worldwide average. Heatwaves and wildfires are getting more prevalent, and deserts are growing. Many species are forced to move or go extinct when their habitat changes in areas like coral reefs, mountains, and the Arctic. Food and water shortages, higher flooding, excessive heat, more disease, and economic loss are among the threats posed by climate change. It has the potential to cause human migration. Climate change, according to the World Health Organization, is the greatest danger to world health in the twenty-first century. Even if attempts to reduce future warming are successful, some consequences will last generations. Sea level rise and warmer, more acidic waters are two examples.

Further glacier melt, ocean warming, sea-level rise, and ocean acidification are all long-term repercussions of climate change. The amount of climate change will be dictated mostly by manmade CO2 emissions over a period of hundreds to millennia. This is owing to CO2’s extended lifespan in the atmosphere. Ocean acidification will last thousands of years due to the slow absorption of CO2 by the ocean. The present interglacial era has been predicted to have been extended by at least 100,000 years as a result of these emissions. Sea level rise is expected to continue for many centuries, with an increase of 2.3 meters per degree Celsius after 2000 years.

What if nothing is done to curb Climate Change?

Scientists believe that if nothing is done, global warming would approach 4 degrees Celsius in the future. This will result in deadly heatwaves, millions of people losing their homes due to rising sea levels, and irrevocable extinction of plant and animal species.

It is high time that people start realizing how big of a danger, Climate change is and start acting towards it. Efforts from every person and country are the ultimate solution to curb it. Join your hands towards a cooler Earth and a cooler you. 🙂