What is Greenhouse Effect? Its Gases, Causes, Solution 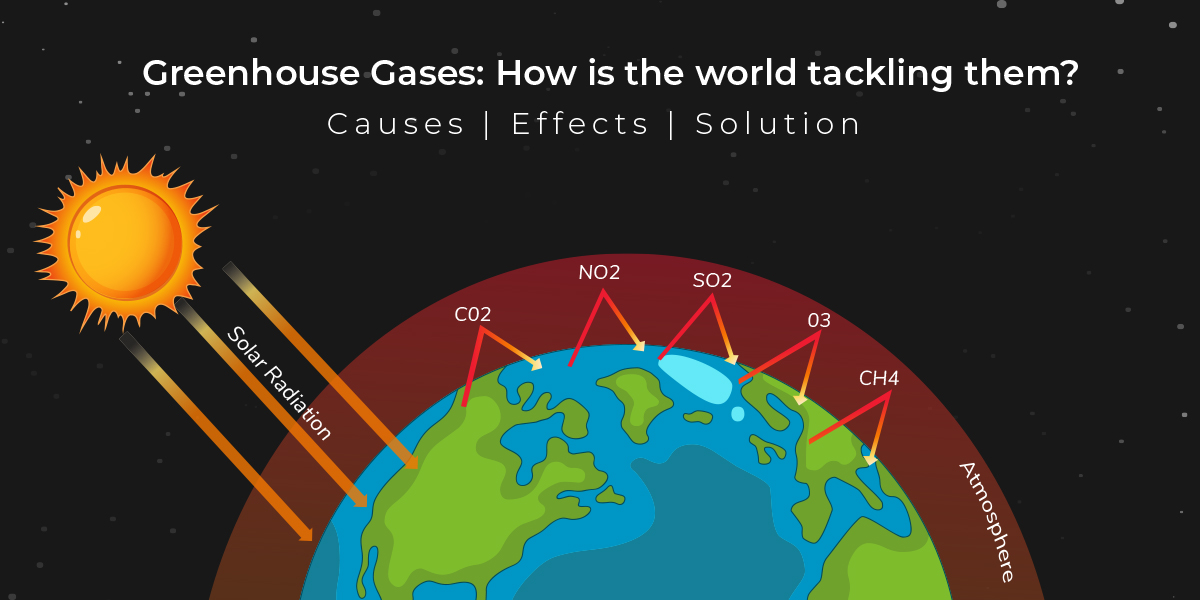 The greenhouse effect is a pretty common terminology that is being tossed around nowadays. But do we really know what it means? How it is harmful? How is the world tackling a problem as serious as this? Read ahead to find answers to all these questions.

What is Greenhouse Effect?

Humans are going haywire after the need for development and are forgetting about the effect it has on our atmosphere. What’s the end result? The global warming curve shooting straight up and causing a number of climate changes.

What Causes the Greenhouse Effect?

The earth is livable because of the sun. While 30% of the solar energy that reaches our planet is reflected back to space, the remaining 70% penetrates through the atmosphere. The land, seas, and atmosphere absorb the reflected gas and heats the globe. This heat is then reflected back.

When the natural greenhouse effect takes place, some of this infrared radiation is reflected back into space. The majority—nearly 90%—is absorbed by greenhouse gases. As a result, the gases redirect the heat back towards the planet, producing more warmth.

What are the Greenhouse Gases?

What are the different Greenhouse Gases that are causing Global Warming?

Human actions (most notably the combustion of fossil fuels) have significantly increased the concentration of greenhouse gases in the Earth’s atmosphere, resulting in global warming. These greenhouse gases are:

The impact of any greenhouse gas on the temperature of the Earth is determined by its chemical composition and relative concentration in the atmosphere. Some gases have a great capacity for absorbing infrared light and are found in large quantities. Others have much lower absorption capabilities and are only found in trace amounts.

Although water vapor is the most powerful greenhouse gas in the atmosphere, it behaves differently than other greenhouse gases. This is because the amount of water vapor in the atmosphere is largely determined by air temperatures rather than by human behavior. Therefore higher the rate of evaporation of water from the surface, the warmer it is. As a result of enhanced evaporation, the lower atmosphere has a higher concentration of water vapor. This water vapor is capable of absorbing infrared radiation and radiating it back to the surface and trapping more heat.

Human emissions presently account for around 7 gigatons (7 billion tons) of carbon released into the atmosphere each year.

Surface, or low-level, ozone is the second most major greenhouse gas (O3). Surface O3 is a byproduct of air pollution, as opposed to naturally occurring stratospheric O3. However, Stratospheric O3 plays a fundamentally different function in the planetary radiation balance.

Moreover, N2O can live in the atmosphere for up to 125 years.

How is the world trying to tackle the Greenhouse Gases Emission ?

The attempt to combat global climate change should include growth objectives for greenhouse gas emissions. This should propose a method for choosing suitable goals for developing and developed nations. Therefore, they should neither be so restrictive that they stifle economic growth nor should they be so loose that they result in massive windfall gains. Even though the maximum emissions have been done by the developed countries, without the cooperation of developing nations, we would not be able to tackle the climate change challenge.

Why are developing nations essential for emission reduction of greenhouse effect?

Firstly, a global problem needs a worldwide solution. The situation is essentially one in which a single country can only make limited progress. Therefore, a successful solution needs the participation of all countries.

Emissions from emerging nations are growing at the fastest rate and will overtake those from developed countries. As a result, without the cooperation of emerging economies, carbon reductions will be ineffective in combating climate change.

If emerging nations refuse to join the international framework, their emissions might climb much higher than expected. For instance, for every ton of carbon emissions lowered by industrialized countries, emissions in developing countries may increase by a quarter ton.

What problems are being faced by the Developing Nations in their battle of emission reduction?

A Conclusion About Greenhouse Effect

Scientists are confident that global temperatures will continue to climb for decades to come, owing in major part to greenhouse gas emissions caused by human activity. The environment has already been affected by global climate change. Glaciers have receded, ice on rivers and lakes has melted, plant and animal ranges have altered, and trees have begun to bloom earlier.

Let us not waste more time and start focusing on our emissions and spread awareness about climate change due to greenhouse gases.